Energy Efficiency Obligations are the cornerstone of the Energy Efficiency Directive from 2012. Under such obligations energy companies are responsible for generating energy savings. This policy was already successfully implemented in 6 EU Member States. Other policies like nearly zero energy buildings and energy certification are also planned. This knowledge package investigates the range of energy efficiency policies that are used in the EU.

The European Union (EU) aims to achieve an energy efficiency target of 20% energy savings by 20201 and 27% by 20302. The Energy Efficiency Directive (EED 2012) and the Energy Performance of Buildings Directive (EPBD 2010) are the main EU pieces of legislation for reaching these goals. Overall the potential to achieve energy savings is the highest in the residential sector, which accounts for 40% of the EU’s final energy consumption3 and 36% of its greenhouse gas emissions4.

The Article 7 of the EED defines that each Member State (MS) must develop an Energy Efficiency Obligation (EEO) scheme, in order to achieve cumulative energy saving targets from 1st January 2014 to 31st December 2020, which are at least equivalent to 1.5% of the annual energy sales to final customers of all energy distributors or all retail energy sales companies by volume, averaged over the most recent three-year period prior to 1 January 2013. The sales of energy, by volume used in transport may be partially or fully excluded from this calculation5.

Article 7 therefore defines energy distributors and/or retail energy sales companies as obliged parties under the EEO, which are due to achieve the energy savings through the implementation of energy efficiency measures. In order to comply with the EED, obligated parties must demonstrate that all measures are material to the achievement of energy efficiency, and additional to business as usual6.

Considering the specific circumstances of MS, Article 7 also allows alternative measures that can be used in addition to or instead of EEOs. These include energy or CO2 taxes; financing schemes or fiscal incentives; regulations or voluntary agreements that lead to application of energy efficient technologies; standards and norms that aim at improving the energy efficiency of products and services; energy labeling schemes and training and education7.

Besides the measures proposed in Article 7, the EED also defines other measures, which include but are not limited to:

2. Energy Efficiency Obligations: the cornerstone of the EED

The focus of Article 7 on implementing EEOs is mainly the result of largely positive experiences with implementing various forms of this policy across Europe. The UK, Italy, France, Denmark, the Flemish Region of Belgium, and Poland have several decades of experience with this policy instrument. In these countries, EEO schemes have delivered large energy savings at relatively low costs and have leveraged investments in energy efficiency8.

An EEO is “a regulatory mechanism that requires obliged parties to meet quantitative energy saving targets by delivering or procuring eligible energy savings produced by implementing approved end-use energy efficiency measures”9. Obliged parties are usually defined as providers of networked energy such as electricity and natural gas distributors or standalone retail suppliers. However, they can also be placed on providers of other energy forms such as heating oil, transport fuels and district heating9. If these obliged companies fail to meet their targets, they are faced with paying a financial penalty10. Globally, EEO schemes have also been implemented in some states in the US, and in Australia, Canada, China and South Korea11.

Complementary to EEOs, trading of energy savings is also possible in some countries in the form of issuing and selling energy efficiency certificates, commonly known as white certificates (WhC). These essentially enable companies to achieve energy saving targets, without having to conduct the projects themselves. A WhC is a “legal instrument issued by an authorising body guaranteeing that a specified amount of energy has been saved”12. In Europe, WhC are traded actively only in Italy and France. In Italy, the scheme is active since January 2005, where one certificate equals 1 toe of achieved energy savings. Between 2009 and 2012 the cost of one certificate in the Italian EEO scheme ranged between € 75 and € 10013. 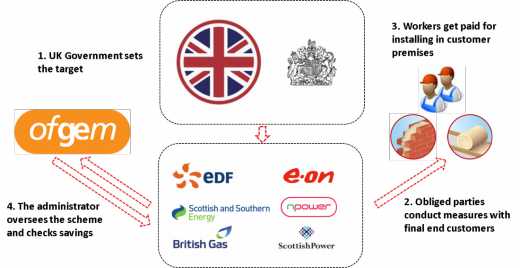 Figure 1: The design of energy efficiency obligation schemes. Energy efficiency obligation schemes have been used since 1994 and have relied on energy companies to implement energy savings measures at their customer’s premises. On the other hand, the UK government just oversees the process.
Source: Adopted from Bertoldi (2011) - Assessment and Experience of White Certificate Schemes in the European Union, (Brussels, JRC European Commission, 2011), p 10

EEOs benefit both the government and end users because they have proven to be a system that saves costs of energy efficiency measures. In the UK, the actual cost of saving a unit of energy has roughly halved in real terms between the introduction of EEOs in 1994, and 2008. The residential sector consumption of natural gas in the UK has decreased 15% between 2004 and 2009, despite a 7% increase in consumers. Detailed analysis has shown that the EEO scheme can be directly linked with this14.

There are several market mechanisms that can explain this. As more energy efficient products penetrate the market, their costs decrease due to economies of scale. Through learning-by-doing, the energy companies also become more skilled in implementing the energy saving measures. In addition, EEOs save public money, as governments typically do not finance the measures. This clearly benefits those MS that are facing a debt crisis14. 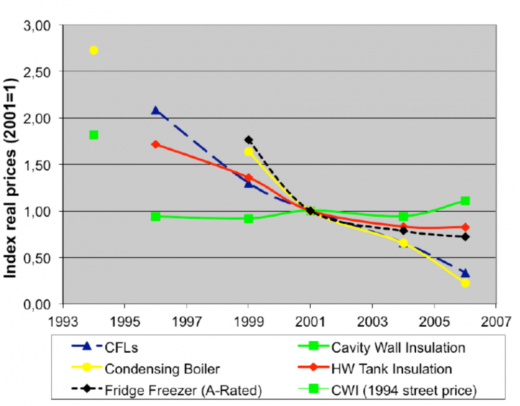 Figure 2: Energy Efficiency Obligation schemes have been very successful in decreasing costs of energy saving measures. This is partially due to the fact that the measures are implemented by companies that are more cost efficient.
Source: Lees E., Energy efficiency obligations – the EU Experience, (Stockholm, European Council for an Energy Efficient Economy, 2012), p 19

Harmonising EEO schemes throughout the EU will be difficult considering the different designs that the present systems have. The countries that had an EEO system in place – at least the five systems that worked prior to the EED – have these important differences:

There are many other differences in the design of these schemes and a more detailed list can be assessed here. In general is it also striking to observe the difference in energy saving targets of EU MS which differ in terms of time frame, units used and accounting (primary energy vs. final energy, etc.)18.

The EED, with a focus on EEOs, was preceded by several other directives, which placed a much bigger emphasis on traditional energy efficiency instruments, especially in the residential sector, considering its significant share in total energy consumption in EU.

The EPBD19 from 2002 introduced minimum energy performance requirements (for new buildings, and existing buildings that undergo major renovation), energy certification of buildings and regular inspection of boilers and air-conditioning systems. This directive was repealed in 2010 when the new EPBD4 came into power. The main changes in comparison to the EPBD from 2002 are:

A review and short definition of these measures is provided below.

Minimum energy performance requirements: they regulate the maximum allowed energy consumption per floor area or volume of space in new and existing buildings. These requirements are also referred to as building codes. They define the performance and technical requirements for individual building segments like ventilation, air-conditioning and heating20.

Energy performance certificates: they show the energy consumption of an existing or new building or building unit, usually ranking it into grades which differ in terms of energy consumed per square meter. The certificates are issued by certified energy auditors and have to be publicly displayed, for instance in advertisements for sale or renting of buildings.

Inspection schemes for heating and air-conditioning: according to the EPBD, regular maintenance of heating and cooling systems ensures their optimal performance from an environmental, safety and energy point of view21. In this respect, the directive stipulates that regular maintenance can lead to significant operational improvements and recommends that such inspections should be combined with certifications.

Nearly zero-energy buildings: the EPBD defines such buildings as those requiring very low amounts of energy and using to a very significant extent energy from renewable sources, including energy produced on-site. The directive requires all new buildings to be nearly zero-energy by 2020 and obliges MS governments to develop all new public buildings according to this concept; after 201822.

Financial instruments: they are intended to catalyse the energy performance and transition to nearly zero-energy buildings. These mainly include instruments that subsidise equipment, keeping their prices low, and grants which are targeted directly at households and which help to pay part of the energy efficiency improvement costs. In addition, MS have implemented loans with preferential interest rates, value-added tax reductions for energy efficient products and levies on energy consumption, which are then used to finance energy savings measures23.

Energy performance contracting (EPC): private companies make contractual arrangements with building owners to conduct energy efficiency measures. Pay-off of investments in such measures is derived in relation to agreed energy performance criteria. The Energy Service Companies, more popularly known as ESCOs, offer energy services, guarantee energy savings and they often finance them. They accept some degree of risk for the achievement of improved energy efficiency and they get paid based on the improvements achieved24.

6. Member States respond to the EED through national action plans

Whichever policies the EU MS have chosen to implement, they were obliged to inform the European Commission about their plans through submitting National Energy Efficiency Action Plans (NEEAP) by 30th April 2014, and then every three years. Analyzing the credibility of these plans can tell us in advance if an MS is likely to reach its energy savings target. After the EED was enforced in 2012, several efforts25 26 27 have been made to assess these plans.